It was a busy night in the back yard. Raccoon, coming and going, cat and shoe.

Ok, ok, I know it’s a day late, this is Wednesday but I got tied up yesterday evening waiting in line for my next new phone.
Today, in honor of the holidays is pecan pie! This is my hubby’s Aunt Murnice’s recipe and it’s the best I have ever had.
The pecan tree is the state tree of Texas and is a native here, many trees have been planted in yards and parks and the smart scavenger can harvest their own crop of pecans. BUT…make sure that you have permission to pick up pecans if they fall on someone’s yard or sidewalk. My current supply comes from someone I work with who gathered them in her yard in return for a pie.

Preheat oven to 400 degrees, remove frozen pie crust from package, let defrost. Thoroughly prick bottom and sides with a fork. Place on baking sheet and bake on middle oven rack for 10-12 minutes until light brown. Cool completely and pour filling into crust.
Reduce temperature to 375 degrees, pour in filling and bake 40 to 50 minutes until set or until a knife comes out clean. Cool on a wire rack.

*I use unrefined sugar for a deeper flavor. 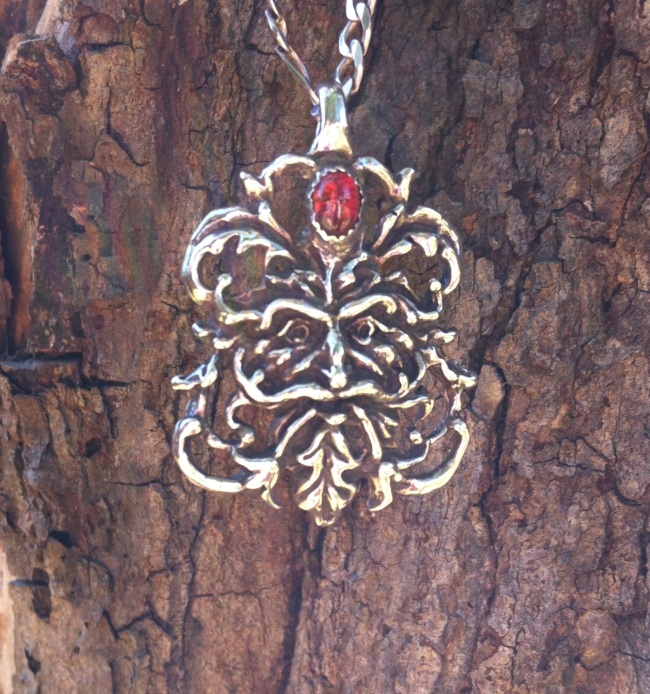 Happy fall, yall! We finally got a break from the heat on this first day of Autumn.

This morning I was looking through the jewelry box, looking for something to put around my neck, and I ran across this guy. He was made by my friend, Robert. Now, Robert is colorblind and the stone in the pendant was supposed to be a peridot which is green. Robert could not see that a red garnet had gotten in amongst his peridots and so this Green Man has a red stone instead of a green one.

The human brain tends to see faces where there may not be any but this face is made of leaves and twigs. The Green Man is a nature spirit who dates to pre-Christian times in Europe and Britain. According to Wikipedia: A Green Man is a sculpture, drawing, or other representation of a face surrounded by or made from leaves. Branches or vines may sprout from the nose, mouth, nostrils or other parts of the face and these shoots may bear flowers or fruit. Commonly used as a decorative architectural ornament, Green Men are frequently found on carvings in churches and other buildings (both secular and ecclesiastical).  Usually referred to in works on architecture as foliate heads or foliate masks, carvings of the Green Man may take many forms, naturalistic or decorative. The simplest depict a man’s face peering out of dense foliage. Some may have leaves for hair, perhaps with a leafy beard. Often leaves or leafy shoots are shown growing from his open mouth and sometimes even from the nose and eyes as well. In the most abstract examples, the carving at first glance appears to be merely stylised foliage, with the facial element only becoming apparent on closer examination. The face is almost always male; green women are rare.

He symbolizes the life that is found in the natural plant world, and in the earth itself. In the greening of the world in the spring and fertility. It is theorized the stonemasons and craftsmen incorporated the green man into architecture and decorative work to “hide” it in the Christian buildings to make the people feel more at home in the place of worship of a new religion.

The Victorians took him up again and used him as a symbol of artistic inspiration and he was used in the Neo-Gothic Victorian architecture.

He has had a resurgence again as a symbol of conservatism, of going back to nature and of a time when the world was young and pristine and also as an artistic motif.